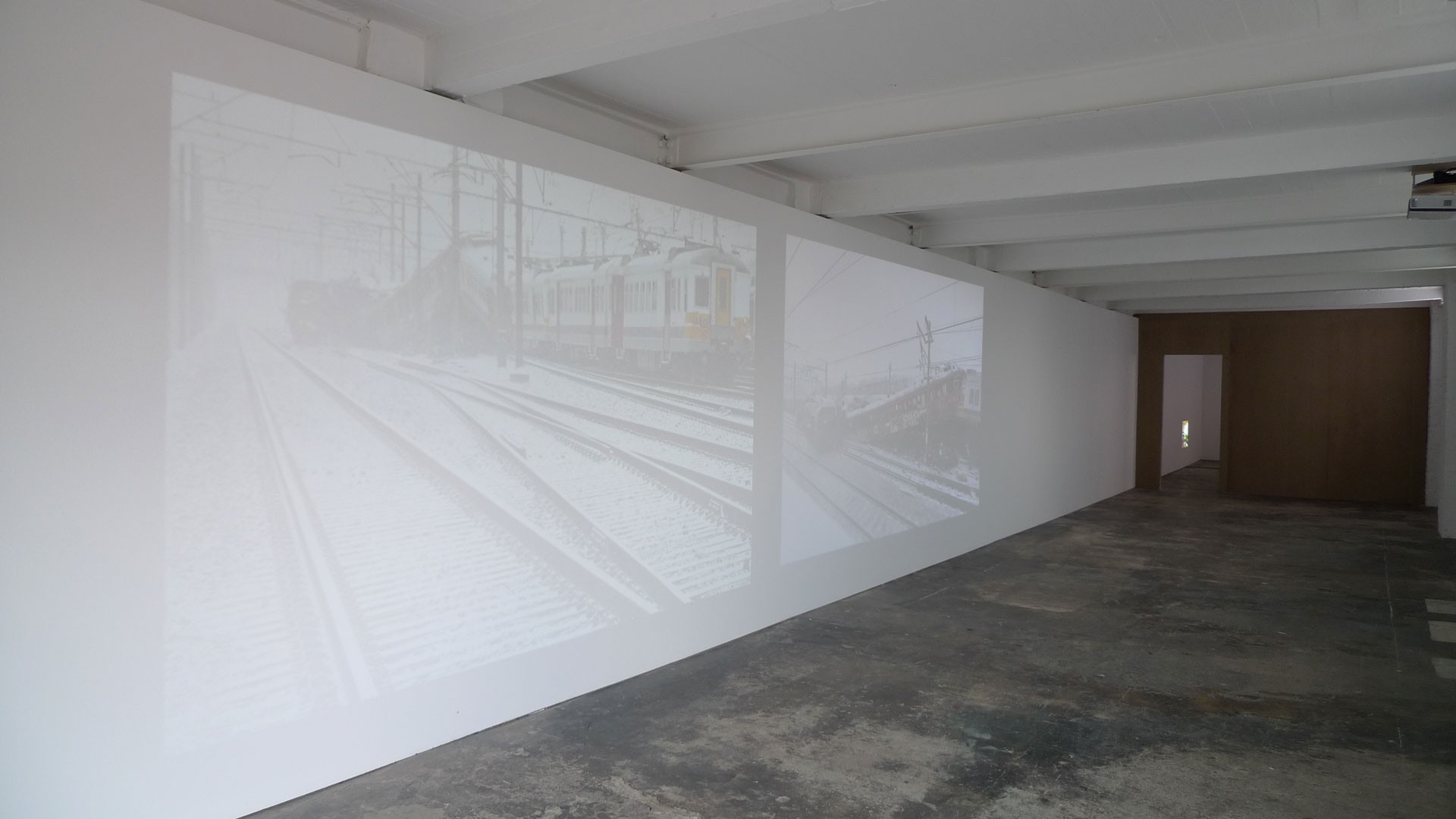 With PeopleScapes #1 and #2, photographer David Bergé offers us two possible alternatives for dealing with the excessive spectacularity of images. Escaping the glossy and rather brainy irony of the 1990’s aesthetics, as well as the cheap thrill of the digital image overload, Bergé balances the tight rope of dealing with everyday images. In a particularly painstaking process of recontexualization, Bergé rescues free-floating images – from the internet, newspapers, advertisements, etc… – out of the maelstrom of marginal markers, and places them back in a kind of timeless time, an endless event re-awakening attentiveness in the viewer.

In PeopleScapes #1 this affectivity as well is undermined: in two blown-up big scale projections, we are confronted with images of the train wreck that took place in Buizingen (Belgium, 2010). But the photos seem eerily peaceful, serene almost in the abstract composition of the triangular shape produced by the train wreck. A colorful shape in a quiet snow landscape, the violence of the image is only allowed to seep in minimally. Instead of the direct sensual impact of the original press photograph, the absence of rescue workers and victims in this reworked version turns around the time experience it provoked at first.

In answer to the Izmit Earthquake (Turkey, 1999), PeopleScapes #2 shows us a seemingly endless procession of empty rooms, accompanied by a series of presumably biographic surtitles. In the images the interiors are often fuzzy, the contours slightly blurred. The rooms look unlived in, emptied out, but still marked by the particular interior design choices of the previous inhabitants. A colourful bed throw, a quirky bit of wall paper, the everyday attempts at rendering the bland into the intimate, the banal into the familiar. The peculiar colours and furniture choices trigger us into imagining a before-life, filling in the tangible absence that throughout the series opens up to us. The emptiness of the rooms seems ominous, awkwardly silence. You can not help visualizing the world outside of these apartments, the city that produced these shabby interiors. Somehow these apartments indicate a zone of abandonment, reeking of urban sprawl and a hot climate. Bit by bit the surtitles become more suggestive, describing the circumstances of one particular day, one particular event. In our minds this dramatic moment is automatically projected into the dumb series of rather banal, amateur images that is presented to us. In that process the everydayness of these snapshots gathers momentum, gets charged with the secret history we presume to have produced them, the catastrophe that would explain the emptiness they portray. But at the same time the doubt seeps in. Somehow the images seem too generic, too unspecific for the subdued drama of the surtitle narrative. A gap opens up between the images and the text, an open space in which we shuffle uncomfortably, left alone to our preconceptions and overenthusiastic identification mechanisms. Bit by bit the images turn into enigmatic placeholders, open to any kind of affective projection, and at the same time resisting any kind of complete recuperation.

The work of David Bergé is wary of the spectacle. It is anti-virtuose. Its journey into the heart of catastrophe is exempt of sensationalism, opening up rather than capturing the moment. Bergé digs deep into the event, not looking for verification so much as for its texture. The careful context he provides for his images opens up a breathing space for reflection. His work attempts to make the moment, outside of time – the catastrophic moment of irreducible change – palpable, allowing it simultaneously its enigma and its refusal to be captured in one glimpse by the mind or the voracity of our empathic emotions. (text Elke Van Campenhout).